People put things in storage for a number of reasons, but most often because they are moving or downsizing and they don’t have any place to put the items.

But, then the owners might fall on hard times to the point they can no longer pay the storage fees. If they can, they remove their possessions before the next rent check is due. But, if they wait too long, the storage unit is padlocked by the company until the back rent is paid.

After a while, if the rent hasn’t been paid, the storage center puts the contents of the room up for sale to the highest bidder. People wind up losing everything of value to them.

There is a popular cable TV show called Storage Wars where pompous people bid for the contents of abandoned storage units, open the items on national TV and cash in on any valuables they find without regard to the original owner. In fact, they openly celebrate the incredible “luck” or “blessing” they received from the transaction.

Shane Jones, a 16-year-old from Rhode Island, thought he’d supplement his summer income by following the example he saw on TV. Taking $100 he saved up from a part-time job at a local bookstore, Shane bid on a storage unit and won.

All the contents were now his and he could do whatever he wanted with them. That included selling the contents for a profit.

But, when he started rummaging through the items found in the storage bin, he realized the treasures probably meant a great deal to the original owner.

“These people didn’t choose to give me this stuff. They didn’t have a choice. It’s almost like a duty to give it back,” Shane told the Washington Post.

As he sorted through the household goods, stuffed animals and personal mementos, he remembers feeling sad — especially when he found documents belonging to the original owner, the paper noted.

Then, Shane went on a mission to track the owner down only to discover he was in jail and in no position to claim his property before it was sold. After returning the belongings to the man’s grateful mother, and enjoying the good feeling he earned for helping someone else, he saved up his money to buy another unit, and then another.

Each time, he tracked down the grateful owners, all of which had a heart-wrenching story to tell and all of whom expressed profound appreciation for the teen’s compassion to return their heirlooms.

Shane’s third locker, which he bought for $50, included all the baby items belonging to a woman who lost a child to sudden infant death syndrome three years earlier. She lost her job, so she couldn’t keep up with payments to the storage center.

However, Shane recovered it all, including photos of when the woman was a child herself, and returned them to her. The contents were the only physical reminders of the baby she had lost.

“He also realizes that kindness inspires kindness,” said Sarah Markey, Shane’s mother. “Buying the contents of a storage unit and giving them back is a creative way to pay it forward. Shane hopes that somebody else will get the idea to do the same thing in their own town.”

The full story with pictures can be found at the Washington Post. 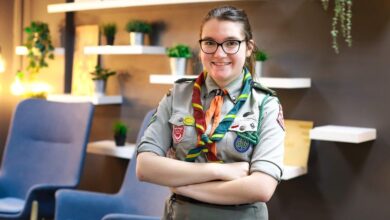